Telavox enables Löfbergs to make changes on their own

“We chose Telavox because it made everything so easy.”

Magnus Henrichson, Head of IT at Löfbergs

One of the Nordics' largest and oldest coffee roasters.

Löfbergs is a coffee roaster with over a hundred years in the industry. It was founded in 1906 in Karlstad by the three brothers Josef, Anders and John Löfberg. Today, Löfbergs is one of the largest coffee suppliers in the Nordics.

The company turnaround is 1,9 billion SEK. They have about 350 employees in seven countries.

Here’s the first generation of the Löfbergs family enjoying a coffee break.

Magnus Henrichson is Head of IT at Löfbergs and realised that their PBX was getting antiquated. Their solution at the time was outdated and awkward, forcing him to go through an external supplier every time he needed to make a change. That’s why usability was key in his hunt for a better solution – and the deciding factor for going with Telavox.

The best of both worlds

When Magnus first started looking for a new PBX solution, Telia was a strong candidate, too. But in the middle of his deliberation, he discovered that Telavox would allow him to have his metaphorical cake, and eat it, too:

“It was important for us to be able to use Telia’s network and have the same priority status as a Telia customer. But since Telavox operate in Telia’s network, we get both Telavox and good connection – the best of both worlds.”

The consistent usability and simplicity of Telavox as a supplier convinced Magnus. From the pricing model to self-administration and user-friendly features, the entire approach struck him as straightforward and clear-cut in a way that matched his company’s actual needs.

“Now, it’s a lot easier to find team members, see what they’re working on and what their status is – if they’re in a meeting, at home with to a sick child, or out on holiday.”

Magnus Henrichson, Head of IT at Löfbergs

According to Magnus, one of the biggest advantages compared to previous solutions is having the ability to take care of administration and changes themselves:

“I was impressed by Telavox, because they enable you to do so much on your own. We can rebuild and adjust the PBX, order new SIM cards, add or remove users directly, create our own hunt groups and expand them as needed.”

Carrying out the transition from one telephony supplier to another is exciting for a Head of IT. Magnus was nervous about potential downtime, and his biggest worry was that they wouldn’t be able to make neither in- nor outbound calls.

“I didn’t sleep well that night, but everything actually went better than expected. We carried out the change at half past five in the morning, without any perceived downtime. Everyone was back on track within half an hour”, he recalls.

Magnus stresses how important working telecommunication is at all times:

“Although a lot of our communication takes place in digital channels, not being able to make outbound calls or receive inbound ones would have been a big problem. Customer contact through the phone is vital for our business”.

Support for direct onboarding – regardless of location

With a Swedish staff count of 150, of which 50 are salespeople who travel a lot, as well as 50 new team members in the UK, onboarding everyone on-site at the head office in Swedish Karlstad was not an option. At the same time, a joint introduction to their new communication tool was a priority for Magnus:

“It was important to me that all our new Telavox users would be included from day one, and learn about the possibilities this solution has to offer.”

He teamed up with one sales person and one Project Manager from Telavox to create bespoke training opportunities for Löfbergs. Team members on-site were introduced to Telavox through workshops, while everyone else was simply onboarded via video call.

Magnus points out that the onboarding process in the UK came with different challenges than the one in Sweden – but that both were successful:

“We timed the transition so we changed to Telavox as our two British companies were moving into the same office. Although we have fewer British staff than Swedish, our Brits have more hunt groups and more landlines. So we had to meet a different set of needs than in Sweden, but were able to do so without any difficulties.”

Telavox has gone down well with Magnus and his co-workers at Löfbergs. In order to make sure staff keep learning about the various features, he uses the company intranet, highlights good examples and encourages users to learn from each other. Together, they explore the features and discover the benefits of using them in their everyday tasks.

“Our previous solution didn’t have an app. Now, it’s a lot easier to find team members, see what they’re working on and what their status is – if they’re in a meeting, at home tending to a sick child, our out on holiday. It lets you get an easy overview of the entire organisation, whether you’re based in the UK or in Sweden. To me, it feels like we’re much more united as a company”, says Magnus.

As Head of IT, Magnus has found another aspect of working with Telavox that has proven particularly rewarding for himself. Given that Telavox develop all their solutions themselves, he is able to communicate directly with the development department.

“Being able to have a continuous dialogue with the people who actually develop the product you’re using is fantastic. I can even suggest improvements. That’s never even been an option with other telephony suppliers”, says Magnus.

This contact with the developers also opens up the possibility of entirely new features in the future:

“We want to be able to integrate our HR system into Telavox, with full control of the user data. That would save us having to update titles, departments, new or leaving employees, in two different places.”

Magnus is excited by the successes Telavox have had, and enjoys working with a supplier that is growing.

“Having followed the evolution of Telavox and having seen how solid the company is, you can’t help but be impressed. As a customer, you want suppliers who are doing well. If our IT-supplier is this creative, capable, and skilled at the business side to boot, it’s bound to have a positive impact on Löfbergs”, he concludes. 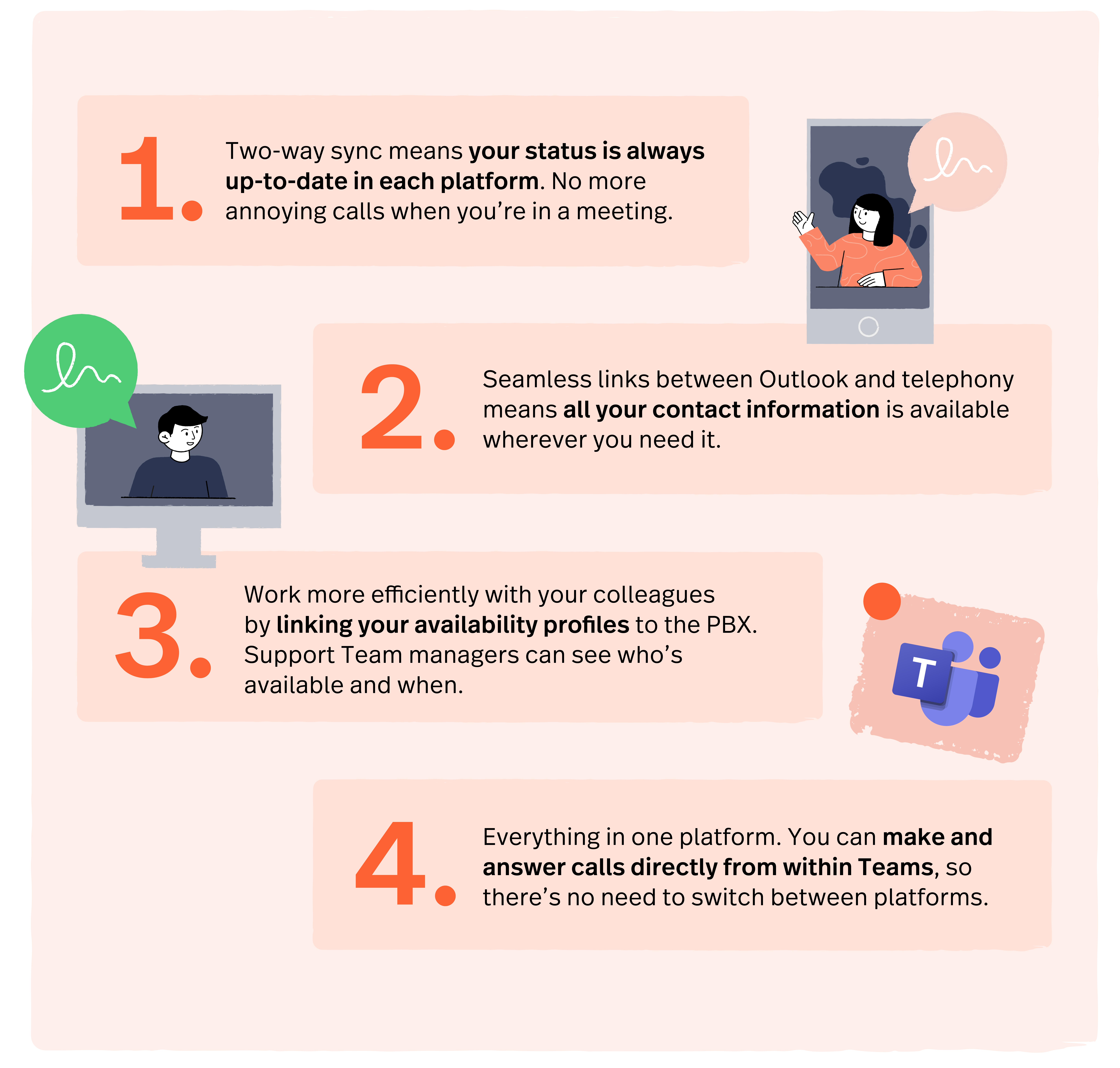